If you’re interested in what’s happening South of the border regarding rates .. then see the below from our Chief Economists.  Thank you Dr Cooper!

Every little bit counts!  Reduction in the qualifying rate explained below by our Chief Economist!  Great read! 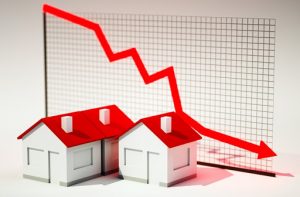 The interest rate used by the federally regulated banks in mortgage stress tests has declined for the first time since 2016, making it a bit easier to get a mortgage. This is particularly important for first-time homeowners who have been struggling to pass the B-20 stress test. The benchmark posted 5-year fixed rate has fallen from 5.34% to 5.19%. It’s the first change since May 9, 2018. And it’s the first decrease since Sept. 7, 2016, despite a 106-basis-point nosedive in Canada’s 5-year bond rate since November 8 (see chart below). 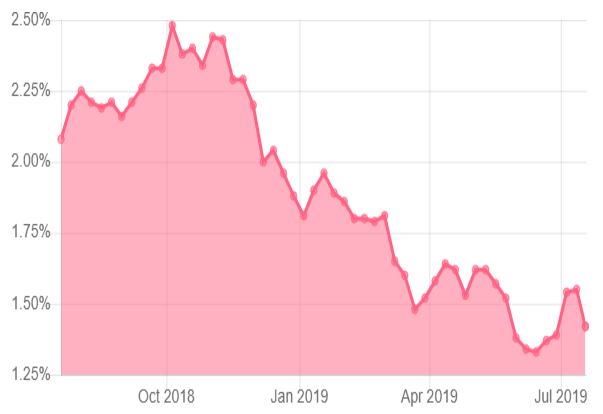 The benchmark qualifying mortgage rate is announced each week by the banks and “posted” by the Bank of Canada every Thursday as the “conventional 5-year mortgage rate.” The Bank of Canada surveys the six major banks’ posted 5-year fixed rates every Wednesday and uses a mode average of those rates to set the official benchmark. Over the past 18-months, since the revised B-20 stress test was implemented, posted rates have been almost 200 basis points above the rates banks are willing to offer, and the banks expect the borrower to negotiate the interest rate down. Less savvy homebuyers can find themselves paying mortgages rates well above the rates more experienced homebuyers do. Mortgage brokers do not use posted rates, instead offering the best rates from the start.
The benchmark rate (also known as, stress test rate or “mortgage qualifying rate”) is what federally regulated lenders use to calculate borrowers’ theoretical mortgage payments. A mortgage applicant must then prove they can afford such a payment. In other words, prove that amount doesn’t cause them to exceed the lender’s standard debt-ratio limits.

The rate is purposely inflated to ensure people can afford higher rates in the future.

The impact of the B-20 stress test has been very significant and continues to be felt in all corners of the housing market. As expected, the new mortgage rules distorted sales activity both before and after implementation. According to TD Bank economists in a recent report, “The B-20 has lowered Canadian home sales by about 40k between 2017Q4 and 2018Q4, with disproportionate impacts on the overvalued Toronto and Vancouver markets and first-time homebuyers…All else equal, if the B-20 regulation was removed immediately, home sales and prices could be 8% and 6% higher, respectively, by the end of 2020, compared to current projections.”

According to Rate Spy, for a borrower buying a home with 5% down, today’s drop in the stress-test rate means:

For a borrower buying a home with 20% down, today’s drop in the stress-test rate means:

Bottom Line: Almost no one saw this coming due to the stress test rate’s obscure and arcane calculation method (see Note below). This 15 basis point drop in in the qualifying rate will not turn the housing market around in the hardest-hit regions, but it will be an incremental positive psychological boost for buyers. It should also counter, in some small part, what’s been the slowest lending growth in five years.

Note: Here’s the scoop on why the qualifying rate fell. According to the Bank of Canada:
“There are currently two modes at equal distance from the simple 6-bank average. Therefore, the Bank would use its assets booked in CAD to determine the mode. We use the latest M4 return data released on OSFI’s website to do so. To obtain the value of assets booked in CAD, simply do the subtraction of total assets in foreign currency from total assets in total currency.”

Chief Economist, Dominion Lending Centres
Sherry is an award-winning authority on finance and economics with over 30 years of bringing economic insights and clarity to Canadians.

Thank you to my colleague at DLC Dave for the below insight, well explained!

A number of times I have had people who wonder why they need to provide so much documentation when it comes to arranging a mortgage. Besides an employment letter, you are usually asked to provide a pay stub and your most recent Notice of Assessment (NOA) to prove income. “Why do they need all 3, doesn’t the employment letter satisfy this condition?” I am often asked. No, is the short answer.

A pay stub shows your current income and shows how much you have made year to date. This will also show overtime or any special allowances you receive such as a northern living allowance. This confirms or sometimes does not agree with your employment letter. The employment letter shows what you are going to make this year and your NOA shows what you made in the past. It also shows that you do not owe taxes to the government. This is important to lenders because they don’t want the government to put a lien on your property ahead of their mortgage claim on title.

Your realtor will provide an offer to purchase and sale agreement, so why do they ask for a MLS listing sheet? While the purchase agreement shows the financial agreement and what is included with the house, the MLS describes the size of the house and lot as well as the amount paid for municipal taxes and the size of each room. This allows the lender to establish whether you have a fair market price for your new home.

Finally, a lender will ask for a 90-day bank statement to show your down payment money. The reason they ask for this is due to Canadian money laundering laws which need to show the source for all funds and that you have been saving the funds over the past 3 months. If you get an inheritance, you will need to show documentation that this is the source of your sudden wealth.
Be sure to contact your local Dominion Lending Centres mortgage professional before making an offer on a home. He/She can tell you exactly what documents you will need in advance and make the home buying process go much easier.

Thank you to our Chief Economist, Sherry Cooper, for the below insight!  You’re the best! – Bob

The Bank of Canada held the target overnight rate at 1.75% for the sixth consecutive decision and showed little willingness to ease monetary policy, as stronger domestic growth offsets the risk of mounting global trade tensions. There has been ongoing speculation that the Bank of Canada would be pushed into cutting interest rates by the Fed. I do not believe the Bank will let the US dictate monetary policy when the Canadian economy is clearly on the mend. To be sure, trade tensions have slowed the global economic outlook, especially in curbing manufacturing activity, business investment, and lowering commodity prices. But the Bank as already incorporated these effects in previous Monetary Policy Reports (MPR) and today’s forecast has made further adjustments in light of weaker sentiment and activity in other major economies.

The Governing Council stated in today’s press release that central banks in the US and Europe have signalled their readiness to cut interest rates and further policy stimulus has been implemented in China. Thus, global financial conditions have eased substantially. The Bank now expects global GDP to grow by 3% in 2019 and to strengthen to 3.25% in 2020 and 2021, with the US slowing to a pace near its potential of around 2%. Escalation of trade tensions remains the most significant downside risk to the global and Canadian outlooks.

The Bank of Canada released the July MPR today, showing that following temporary weakness in late 2018 and early 2019, Canada’s economy is returning to growth around potential, as they have expected. Growth in the second quarter is stronger than earlier predicted, mostly due to some temporary factors, including the reversal of weather-related slowdowns in the first quarter and a surge in oil production. Consumption has strengthened, supported by a healthy labour market. At the national level, the housing market is stabilizing, although there remain significant adjustments underway in BC. A meaningful decline in longer-term mortgage rates is supporting housing activity. The Bank now expects real GDP growth to average 1.3% in 2019 and about 2% in 2020 and 2021.

Inflation remains at roughly the 2% target, with some upward pressure from higher food and auto prices. Core measures of inflation are also close to 2%. CPI inflation will likely dip this year because of the dynamics of gasoline prices and some other temporary factors. As slack in the economy is absorbed, and these temporary effects wane, inflation is expected to return sustainably to 2% by mid-2020.

Bottom Line: The Canadian economy is returning to potential growth. “As the Governing Council continues to monitor incoming data, it will pay particular attention to developments in the energy sector and the impact of trade conflicts on the prospects for Canadian growth and inflation.” With this statement, Governor Poloz puts Canadian rates firmly on hold as Fed Chair Jerome Powell signals openness to a rate cut as uncertainty dims the US outlook.

The Canadian central bank is in no hurry to move interest rates in either direction and has signalled it will remain on hold indefinitely, barring an unexpected exogenous shock.

….. From our Economist Dr Sherry Cooper, thank you Sherry!

Some food for thought here for sure ……

A recent article in the Huffington Post addressed the pricing strategy for the Big Six Banks, BMO, CIBC, National Bank, RBC, Scotia and TD and who really sets interest rates.  RBC announcing a rate drop in January and the other banks soon followed.  For consumers the banks are seen as leaders of the pack and everyone waits to see what else they will do.  The reality is the bank rates were higher than the market for some time.

The Huffington article states “Canadians pay attention to the big guys, however, because they’re either too comfortable to make a change or simply not aware they’re being taken for a ride. The banks have a 90-per-cent stranglehold on the Canadian mortgage market and we’ve been slow to start paying attention to the alternative — often cheaper — options out there.”

The drop in rates was a measure to bring bank rates in line with the non-bank lenders who have already been offering lower pricing. The only difference is the banks have high market share of the business and more profit each year so they can afford to spend money on media and other forms of advertising. The media attention helps them to capture more business with a rate drop after a lag time of passing on higher rates to consumers. The informed consumer working with an independent mortgage broker will already know the market and what mortgage product is best for their needs.

However, interest rates are not the only consideration when choosing a mortgage. Each time you make a purchase, renew your mortgage or take equity out to renovate, invest or other reasons, it is always best to consult with your mortgage broker for a review.

One of the big factors is the cost to exit that mortgage before maturity. Life happens. There are costs to breaking the contract early in the event of sale, marital break-up, death or need to consolidate other debts. Bank penalties for early payout are higher than non-bank penalties by a factor of 4 times. By reviewing your needs with your Dominion Lending Centres mortgage broker, we can discuss all of the options available from lenders including bank and non-bank, to ensure you are making an informed decision.