Dave has some really great points here, thank you Dave!

4 HOME IMPROVEMENTS THAT WILL PAY YOU BACK

Some home improvements provide more of a payback when you sell the house down the road.

Here’s a list of the four home improvements which will provide the biggest payback when you sell.

If you are thinking about buying a home or renovating your present home, speak to your Dominion Lending Centres mortgage professional about how they can help you to finance any of these projects in your mortgage and pay low interest rates.

This is a great program if you are trying to get into the market. Informative article from my colleague Angela. Worth checking out.

We have seen a return of the buyers’ market and many people are asking, how long will this last? While some renters without a down payment might be asking, how can o put a plan in place to own?

With the cost of living so high, and student debts coming out of school, many consumers question how they’re going to come up with a down payment for a home.

Here are some ways you can get it done.

For those of you that want to partner with government for down payment and profit of home ownership, a new government program can be a helpful tool provided it stays past the October election. https://www.cmhc-schl.gc.ca/en/nhs/shared-equity-mortgage-provider-fund

You might me reading this and thinking, ‘yeah right, that is not reality.’ Or for some people, you know it might just be exactly what will help them move forward.

Perhaps you have graduated from school and your parents don’t charge you rent. Imagine if you could put one of your paycheques every month aside and try living within those means and budgeting accordingly.

Or say you have a partner and one of you just started work in a specific trade and the other’s paycheque went towards the “home purchase plan.”

Also, if you are within the qualifications to buy, you will be earning a combined household income of $125,000-plus per year, so taking those funds right from your paycheque into your RRSP will have additional tax benefits too where you can use the refund for closing costs or amp up your down payment.

Here’s an example of how this worked for a lab technician and chef with a two-year old daughter.

They did a combination plan as they moved up to Canada from the U.S. two years ago, both got stable jobs and had no outside debt. They were paying $1700 a month rent. They used a $10,000 line of credit they took to put into investment to help establish Canadian credit. After getting the line of credit and placing it into a safe investment, they:

Are there holes in the plan? Yes, home prices may go up, there was interest on the loan they paid and they may have to adjust or modify their plan. Their employment can change, however, this practice will only benefit them no matter what life brings their way and there is a sense of empowerment when you have a plan and can see how you can get there.

Do you or someone you care about want to know how they can be set up with a multifaceted plan to help them move forward with a goal of owning a home?

Have you heard about the New First Time Home Buyers Plan being released by the Federal Government?  See below for link as well as details.

May Shows Signs of Improvement In BC and Alberta

Statistics released late last week by the Canadian Real Estate Association (CREA) show that national home sales increased in May. Together with monthly gains in the previous two months, activity in May reached its highest level since early last year when the new B-20 stress testing was introduced. While last month’s home sales stood 8.9% above the six-year low posted in February 2019, this latest uptick has only just returned May’s sales level to its 10-year historical average (see chart below). Nationwide, sales were up 1.9% month-over-month, and relative to a year ago, sales rose 6.7% marking the biggest year-over-year gain since the booming summer of 2016.

Sales were up in only half of all local markets, but that list included almost all large markets, led by gains in both the Greater Vancouver (GVA) and Greater Toronto (GTA) areas. There were encouraging bursts of activity in Victoria, Calgary and, to a lesser degree, Edmonton. Resale activity was up 24% from April in Vancouver, Victoria posted a 10% gain, and Calgary resales rose 6.6% month-over-month.

These are early signs that the cyclical bottom has been reached in that region of the country. Market conditions are still soft, though. Property values remain under downward pressure for now with the MLS Home Price Index down from a year ago in May in Vancouver (-8.9%), Calgary (-4.3%) and Edmonton (-3.7%). That said, the rate of decline moderated in Calgary and Edmonton, which is a further sign that these markets are stabilizing. 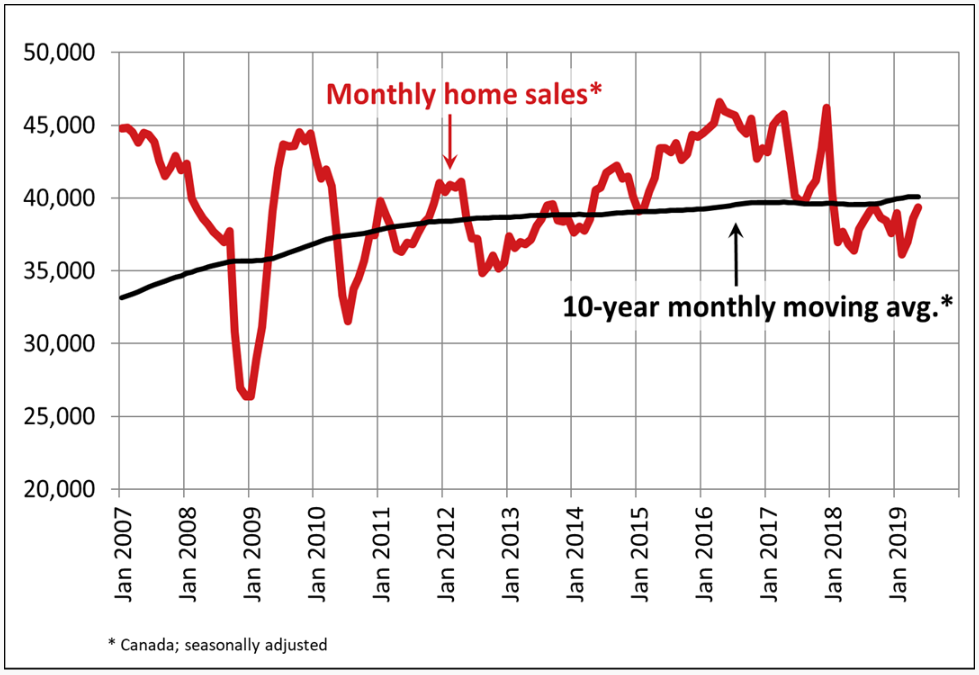 There were 5.1 months of inventory on a national basis at the end of May 2019, down from 5.3 in April and 5.6 months back in February. Like the sales-to-new listings ratio, the number of months of inventory is within close reach its long-term average of 5.3 months.

Housing market balance varies significantly by region. The number of months of inventory has swollen far beyond long-term averages in Prairie provinces and Newfoundland & Labrador, giving homebuyers in those parts of the country ample choice. By contrast, the measure remains well below long-term averages for Ontario and Maritime provinces, resulting in increased competition among buyers for listings and fertile ground for price gains.

Trends continue to vary widely among the 18 housing markets tracked by the MLS® HPI. Results remain mixed in British Columbia, with prices down on a y/y basis in the GVA (-8.9%), the Fraser Valley (-5.9%) and the Okanagan Valley (-0.7%). Meanwhile, prices edged up 1% in Victoria and climbed 4.7% elsewhere on Vancouver Island.

Across the Prairies, supply remains historically elevated relative to sales and home prices remain below year-ago levels. Benchmark prices were down by 4.3% in Calgary, 3.6% in Edmonton, 3.9% in Regina and 1.3% in Saskatoon. The home pricing environment will likely remain weak in these cities until demand and supply return to better balance.

Bottom Line: The Bank of Canada is counting on a rebound in economic activity in the current quarter and believes growth will accelerate further in Q4 and 2020. That should keep the Bank on the sidelines for some time. Currently, the markets are expecting the Federal Reserve to cut interest rates in July and to continue to do so in 2020. Indeed, President Trump is lobbying hard for rate cuts. It is unlikely that the Bank of Canada will follow the Fed unless the trade war with China worsens. Political pressure is mounting on the administration to reduce trade tensions. Trade uncertainty is the only thing right now that would derail the Canadian recovery. 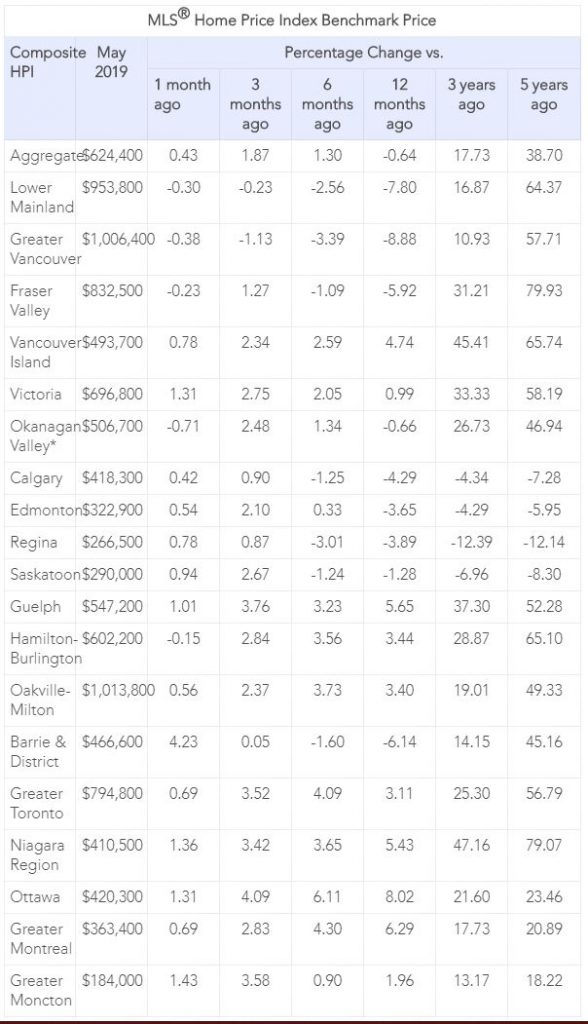